Today, we are making another kind of tamale- green tamales with chicken or tamales de pollo en salsa verde. These chicken tamales are made using masa harina, stuffed with a chicken filling and a homemade green tomatillo salsa. In this post, you will find a step-by-step photo tutorial along with simple instructions on how to make a batch of green tamales!

My grandfather died on a December day so many years ago that I hardly remember him. But, since then, the whole family used to gather together the same day in December at the farm.

We call that "Cabo de año”. It is a ceremony or religious service performed on the anniversary of a person’s death. Our family had a mass service at night but during the day, it looked more like a huge family celebration.

I have memories of those gatherings being like a big party. There was a prayer time in the evening that will be the culmination of the day of remembrance. But for me, the big attraction was the cooking going on in the kitchen.

The men would arrive very early in the morning to kill the pig. Yes, a large pig that has been fed the whole year for this purpose. Part of the animal will be cooked as pork carnitas and some would be made into chicharrones. Anything left over would be added to some of the different stew dishes that would typically be served during lunch. But after that, all the women and some men of the family will get into the main dish for dinner.

Many times, this would involve making tamales.

Everyone will be working together for the “Tamalada” (a tamale-making party! Well, sort of….). You could hear stories being told from times long ago, funny ones and even scary ones, during those tamales making times.

That is the fun part of making tamales- the family gets together to make them, almost like a family affair. We always end up having a nice time, not only eating them but making them. But, if you want to cook tamales and your relatives are far away, invite your neighbors or your friends! Trust me- You will have a memorable time cooking together.

Nowadays, I usually make them for my family, planning a little bit ahead of time.

One day cooking the filling and the next day preparing the corn masa dough and the assembling of the tamales. That way it seems easy to make them since I usually make them by myself.

Tamales are traditionally made of a corn-based dough and some sort of filling. Its Nahuatl name is a Tamale, meaning wrapped corn.

Homemade tamales are usually steamed in a leaf wrapper. The most common wrapping is a corn husk, banana leaves, avocado leaves, hoja santa, and other non-toxic leaves used in some regions of Mexico.

We made tamales with different types of fillings in Mexico, the stuffing could be chicken, pork, ground beef, shrimp, vegetables, and cheese. Just to mention a few of them. The salsas that we add to the stuffing range from Mole poblano sauce, Mole Oaxaqueño, red dried peppers, tomatillo salsa, also known as green salsa or salsa verde. And, every region has its own version of fillings for the tamales.

We also have the sweet tamales, some with raisins, coconut, pineapple, nuts, chocolate tamales. Nowadays, cooks are creating new flavors, like Guava, Dulce de Leche, and even flan flavored tamales.

There are more than 500 varieties of tamales but like a sandwich, the different variety of options are endless!

Remember, Tamales can be filled with meats, cheese, vegetables, chiles, or anything really.

For today's tamale recipe, I decided to make a chicken filling and a homemade green tomatillo salsa to go along with it.

Here is a list of ingredients you will need:

You will also need about 45 corn husks for wrapping.

How To Make Green Salsa Tamales With Chicken: Step By Step Tutorial

To make things easier for you, I am going to breakdown the directions to this recipe into sections.

To make your own tomatillo salsa:

Once the chicken filling and the green salsa are prepped:

What To Serve With Chicken Tamales

As much as I enjoy eating my green tamales just the way they are, sometimes, I'll serve them with an extra side of green tomatillo salsa. 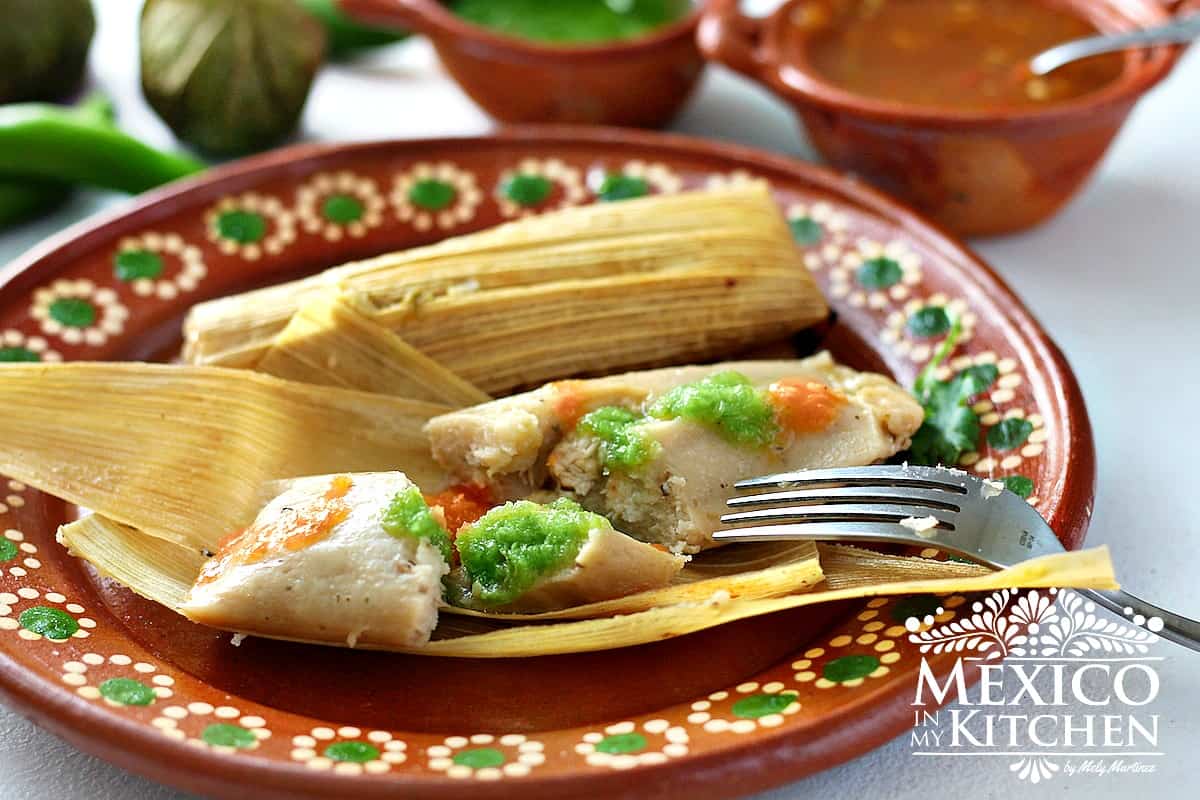 If you enjoyed this recipe for green tamales with chicken, take a look at some of these other authentic Mexican recipes:

I hope you make these tamales de pollo en salsa verde, and if this recipe was of any help to you, come back to let me know your experience. Please leave us a comment done below and tell us all about it! 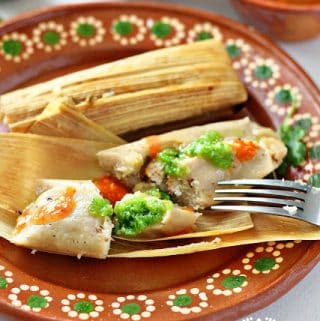 Tamales keep well in your freezer for a couple of months.