You are here: Home » Mexican Desserts

Guavas have a unique flavor that is hard to describe, but they are sweet and delicious. It can be used in many dishes - desserts, drinks, and savory dishes. It's very versatile! In this blog post, I will teach you how to make guava syrup from scratch as well as the basics of making an amazing guava compote.

I grew up in a town where guavas, mangos, tamarinds, and other tropical fruits grew everywhere! All you needed to do was reach up and pick from a fruit tree whenever you wanted.

Lucky for me, my abuela had several guava trees in her backyard, and my cousins and I used to love to climb up them and eat the guavas up there. They are light, sweet, and loaded with vitamin C, even more than oranges or lemons. So, they made the perfect snack.

I've been craving them lately and thankfully, when I went to the local farmer's market here a few days ago, I was able to pick some up!

With that batch, I was able to make my guava jam and my guava agua fresca. And, I had just enough to make this guava syrup and compote.

I was very excited!

Note: Guavas are usually sweet and have lots of seeds and are very aromatic; their skins are soft and can easily bruise, so be gentle while picking up your guavas at the market.

Before I share this recipe, here are a few questions I've been asked and wanted to answer.

What other fruits does guava go with?

Guava is delicious with so many different fruits. Some of my favorite pairings with guavas are:

What's the difference between jam and compote?

The biggest difference between a jam and a compote is the way you cook them.

With jam, you cook the chopped fruits with sugar and pectin until they break down and start to thicken into a jam.

When you make a compote, you are cooking the fruit in simple sugar syrup. Compotes tend to be less sweet than jams and more flavorful because they are cooked in a liquid.

I have too many fresh guavas. Can I freeze them?

Yes! If you have a few fresh guavas you want to save for when they are not in season, you can store them in a resealable freezer bag and stick the bag in the freezer. You can later on use them for desserts, smoothies, or other recipes.

Here is a list of ingredients you will need to make this recipe at home...

How To Make A Guava Compote Syrup: Step By Step Tutorial

To make things easier for you, I am going to break down the directions to this recipe into sections.

Note: Don’t worry if you are not able to remove all the seeds. They will loosen up when you add them to the syrup, and you can also use a strainer to remove them.

How To Properly Store Guava Compote

Whenever you make this homemade guava compote, you need to make sure it is stored properly so it lasts as long as possible. With that being said, guava compote is not the same as guava jam. It can only stay fresh for up to 2 weeks if you store it properly in the fridge and in an airtight container (or mason jar).

You can also freeze it in an air-tight container and take out as much as you need when you need it. Just make sure it's completely cool down when you do.

What To Serve With Mexican Guava Compote and Syrup

With this recipe, you can use the fruit compote, the syrup, or both together!

The cinnamon guava syrup is a delicious topping for pancakes, french toast, or used in a drink (alcoholic or tea) like this guava agua fresca drink. It's also great to add to a sweet marinade for pork!

The guava compote can be served with pound cake, crepes, cheesecake, yogurt, or poured over vanilla ice cream. It's very delicious.

If you enjoyed this recipe for guava compote, take a look at some of these other authentic Mexican recipes:

I hope you make this Mexican guava syrup compote! If this recipe was of any help to you, come back to let me know your experience. Please leave us a comment done below and tell us all about it! 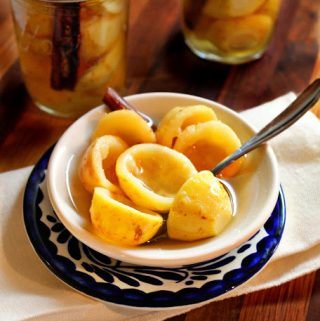 Mely Martínez
This recipe for Guava Compote, or Guavas in Syrup, can be prepared in a matter of minutes. It can be served warm or cold, by itself or over ice cream, yogurt or even pound cake.
4.67 from 3 votes
Print Recipe Pin Recipe
Prep Time 15 mins
Cook Time 20 mins
Total Time 35 mins
Course Desserts
Cuisine Mexican
Servings 6
Calories 310 kcal