You are here: Home » Drinks

With just a few ingredients, you can turn your standard beer into a flavorful, refreshing Michelada Cocktail!

If you’ve ever traveled to Mexico, you’ve likely had a Michelada cocktail or two. But did you know that this Mexican beer cocktail is actually extremely easy to make at home, with just a handful of ingredients?

This drink is the go-to for many Mexicans watching a sports game or enjoying a barbeque with friends. Read on to learn how to make your own Michelada!

What is a Michelada?

Michelada is a Mexican Beer Cocktail featuring beer, ice, lime juice, salt, and an assortment of sauces. These typically include Worcestershire sauce, a hot sauce (like Tabasco, Valentina, or Tapatio), and a seasoning sauce (like Maggi).

There are a few main variations to the michelada recipe.

Additionally, there is a simpler version of the Michelada which is simply referred to as a “Chelada”. This one does not use savory sauces (Worcestershire, hot sauce, etc.), and only uses beer, ice, and lime juice. The rim of the glass is still coated with salt or a crushed pepper mix (Tajín).

These are the main variations, but on top of this any restaurant or cook can make their own changes. These include changing the sauces. For example, instead of Maggi sauce, some might use soy sauce (or both), and the brand of hot sauce used will be whichever the person prefers.

All across Mexico, you will encounter different methods of preparing Micheladas, changing from person to person and from restaurant to restaurant.

How do you serve a Michelada?

Micheladas are commonly served in a glass beer mug that has been frosted in the freezer. This ensures that the michelada stays cold for your refreshment. If you don’t have a glass beer mug, you can use a regular tall glass to make your michelada.

The glass mug used to serve the Michelada is usually rimmed with salt or a crushed pepper mix like Tajín. First, a wedge of lime is run over the rim to coat it in lime juice, then the rim is dipped into salt, a crushed pepper mix, or both. In the case of the Michelada with Chamoy, chamoy sauce is used to coat the rim of the glass instead of lime juice. It is then coated with the salt or Tajín, just like the regular michelada.

As far as toppings go, a Michelada will be fine by itself or with a simple wedge of lime on the rim of the glass. However, some people like to go all out with the toppings, and will add things like cucumber slices, celery stalks, skewers with fruits or vegetables, peeled shrimp, or peppers like jalapeños. The toppings can be either savory or sweet, as some people even use candy or popsicles! Just like with Bloody Marys, some people like being quite extravagant with their Michelada toppings.

Where did the Michelada beer cocktail come from?

Well, honestly... no one knows. Like with many cocktails, there are multiple origin stories explaining how and when the Michelada was created, but there’s no definitive answer as to which one is true. It all depends on who you ask!

One popular story centers around a man named Michel Ésper. He frequently ordered drinks at a sporting club in San Luis Potosi, Mexico, and had the habit of ordering his beer on ice, with lime and salt added. Eventually, other patrons began to order the same, and referred to the drink as a “Michelada”, combining the name “Michel” and the word “Limonada” (“lemonade” in Spanish).

Some people think that the the Michelada was created from the love that Mexicans have of adding lime to foods and drinks, and to coating the rim of their glasses with lime and salt when making cocktails.

This seems to be a likely theory since it’s definitely true that Mexicans add lime to EVERYTHING... so why not beer too?!

Why are Micheladas so refreshing?

Part of the reason a Michelada is so refreshing is the lime juice. It really breaks up the heaviness of the beer and adds a light fresh flavor to it.

Micheladas are also served over ice, and that makes them super cold and the perfect thing to cool you down on a hot day. It also helps that the glass is usually ice cold too!

Oftentimes, yes, but it depends on the ingredients. You can easily adjust the level of spiciness by adding or omitting some of the ingredients. Not a fan of spiciness? Omit the Tabasco and crushed pepper mix. Love it? Then add extra! Micheladas generally aren’t super spicy, they just have a small kick to them.

What foods go with Micheladas?

Micheladas can go with almost any savory food. They are typically enjoyed with Mexican foods and snacks, including Tacos, and Tostadas. They are also enjoyed when eating grilled steak, grilled shrimp, seafood cocktails, and other seafood dishes. If you are making Micheladas for a game, party, or barbeque, then they will go great with foods like nachos and chips with salsa!

What’s the best type of beer for a Michelada?

Micheladas are typically made using a light Mexican beer, often a lager. This is what I would recommend you use if it’s available in your area (any brand will do). Alternatively, some people also like using dark Mexican beers for their Micheladas. Nevertheless, you can use whatever type of beer you like, including craft beers and even non-alcoholic beer.

Here is the list of ingredients you will need to make a Michelada Cocktail:

You will find the amounts in the recipe card below.

You will need to tall beer glasses previously chill or frost in your freezer for at least 60 minutes.

How to make a michelada cocktail 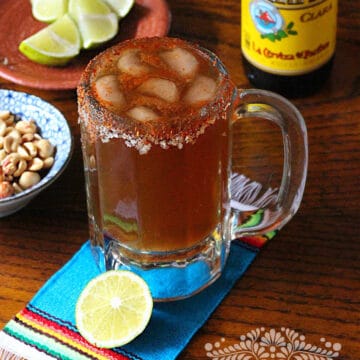 Mely Martínez
And for moments like those when you are sharing with your friends and having to fun nothing like an ice cold beer but this time a beer cocktail, a famous one in Mexico. Some references mention that Michelada was created from the love Mexicans have of adding lime to food and drinks.
5 from 8 votes
Print Recipe Pin Recipe
Prep Time 5 mins
Cook Time 0 mins
0 mins
Total Time 5 mins
Course Drinks
Cuisine Mexican
Servings 2 people
Calories 124 kcal

You will need two tall beer glasses previously chill or frost in your freezer for at least 60 minutes.